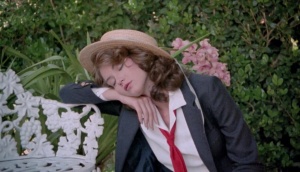 In this, director Victor Nye’s feature debut, schoolgirl Betty (Angel) falls asleep while studying for her final exam. In her dreamy reverie she imagines having all the wild sexual adventures she has missed out on as the school’s resident goody two-shoes. 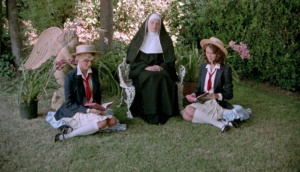 The plot is pencil-thin, of course, but there’s nothing more hilarious than a film opening on the voracious Lisa De Leeuw in full nun’s habit! The film is framed as one long dream sequence in the head of the virginal (ahem) Angel, then new to adult films and not yet the superstar she would become. Angel is quite good as the doe-eyed protagonist, as is Ginger Lynn as her more worldly BFF. The acting is rather ropey and the threadbare script doesn’t help much, but producer Suze Randall and director Nye knew the writing was on the wall and concentrated on the sex. That’s where the film comes up trumps…with a few caveats.

There is a surprising amount on non-consensual sex on display in this film. That sort of thing had fallen out of favor by this point but since the film is a dream sequence it brings to mind the theory that for people who are conditioned to see sex as sinful (as our Catholic schoolgirl protagonist certainly has been) one way to enjoy sex is to fantasize about being taken. Erica Jong-style theorizing aside, I doubt that was the filmmakers intention, but that notion does make the (VERY hot) sex scenes in this film much easier to, ahem, swallow. 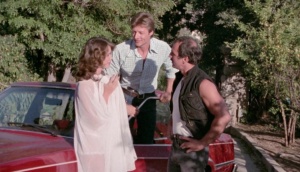 The supporting cast is a who’s who of genre players, most of whom were soon to fade away as the video age took hold. Lisa De Leeuw, Eric Edwards, Jamie Gillis, Harry Reems and Michael Morrison were all familiar faces in the late 1970’s and decent actors to boot. All bar Gillis would taper off their appearances before fading to black. Some of the female cast (Heather Thomas, Raven, Lois Ayers, etc) would hang on for a few years before disappearing, but even Ginger Lynn was on the cusp of retiring by this stage.

TOO NAUGHTY TO SAY NO suffered in previous home releases, but the fine folks at Vinegar Syndrome have come to the rescue with two great releases of the film! Their standard DVD release features terrific restored picture and sound, scanned from the original 35mm negative. Also, this is the first time the film has appeared in widescreen on a home video release. The disc includes a wonderful commentary with husband-and-wife team of Suze Randall and Victor Nye who are always a treat to listen to. Suze is hilarious and pulls no punches in her assessment of her career and the many interesting characters that it has brought into her life.  Vinegar Syndrome also included the film in HD on their limited edition 5 FILMS 5 YEARS VOLUME 1 set.

While TOO NAUGHTY TO SAY NO isn’t quite NEON NIGHTS or THE STORY OF JOANNA, it is a very well-made fond farewell to an era and the people who made it so memorable. For story, give it a miss. If you want to enjoy blistering-hot sex with a cast of favorites, well, you will do quite nicely with TOO NAUGHTY TO SAY NO.

If you would like to reproduce any editorial material appearing on this site, or would like me to contribute material to your publication, please contactJohnny Stanwyck.

This site presents material for critical and informational purposes. All text, unless otherwise noted, is original to this site. Any visual material (images and/or video) not created solely for this site are presented in strict adherence to the Fair Use provisions of U.S. Copyright law.