A Tribute to the Queen of Sexploitation 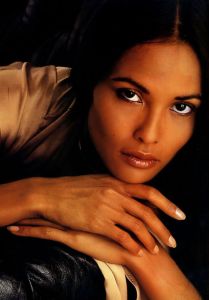 Her skin was like honey-dipped chocolate.  Her sensual mouth always seemed to suppress a little smile.  She possessed a figure that was both willowy and voluptuous at once.  She writhed under tropical palms and upon stately brass beds accompanied by a swaying, sexy soundtrack.  The goddess’ eyes had a far-away look, dancing with just a glint of humor which brought her heavenly allure back into an Earth-bound body.  She was both exotic and familiar.

Laura Gemser was the Queen of Sexploitation for more than a decade in a career that lasted nearly twice as long.  While there were skin flicks a-plenty, the busy actress could also be found dodging zombies and cannibals or fielding samurai swords and disarming crime busters while loving every minute of it.  She wasn’t your standard sex goddess, indeed not.  Her appeal was far from only skin deep.  Gemser never seemed to take herself too seriously, making her far more relatable than your average cinema Venus.  Utterly unambitious, Gemser fell into films.  In doing so, she saw the world, found new friends, lost the love of her life, and walked away from celebrity as quietly as she entered it.  She exited films like a spirit fading into ether, leaving behind a ghostly silhouette.  In some ways her story of accidental celebrity is lacking in intrigue or drama, but that’s what makes Laura Gemser so remarkably human and unforgettable.

Laurette Marcia Gemser was born October 5th, 1950, in Surabaya, the capital of the Indonesian province of East Java.  Her family would immigrate to the Netherlands when she was four years old to settle in Utrecht.  Upon finishing secondary school, she studied Fashion at the Artibus Art School.  During this period Gemser signed with a modelling agency and was soon much sought after for nude layouts in countless men’s magazines.  She worked with many of the great photographers of the day including Francis Giacobetti.  That collaboration would change the course of Gemser’s life and ensure her cult siren immortality.

Gemser’s evocative photographs quickly brought the attention of the Italian film industry.  She was soon in front of motion picture cameras in the Seychelles for AMORE LIBERO – FREE LOVE (1974).  Shortly after her debut she was contacted by Giacobetti for a tiny role in the sequel to the phenomenally successful French film EMMANUELLE (1974).  It was the minor role as a masseuse in EMMANUELLE 2 (1975) that led to her being cast as the titular bed-hopping, globetrotting journalist BLACK EMANUELLE (1975), with producers dropping one “m” from the name to keep the lawyers happy while riding the “Emmanuelle” coattails. 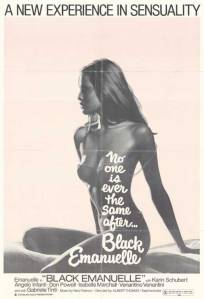 The Italian films took a decidedly seedier direction than their soft focus French counterparts.  With Gemser in the lead, Black Emanuelle swung amongst swingers, toppled sex slavery rings, unspooled snuff filmmakers, and took a bite out of cannibals in one of the most successful Italian film series in history.  Each successive film wandered further and further into the gutter.  By the time she reached the third installment, EMANUELLE IN AMERICA (1977), Gemser’s Emanuelle bore witness to an orgy of explicit sexual shenanigans and buckets of stomach-turning gore.  Things got decidedly more bizarre when Emanuelle returned as a conflicted nun in the head-scratching SISTER EMANUELLE (1977) and the gratuitously jiggly and cartoonishly violent EMANUELLE AROUND THE WORLD (1977).

INTO THE MAINSTREAM . . . ALMOST

Despite these forays into “legitimate” film, Gemser remained unmotivated by pursuit of “craft.”  In the few interviews she has granted since her time in cinema, she relates that she took roles in films in order to travel the world and to have experiences that would otherwise not be available to her.  Coming along for the ride was actor/husband Gabriele Tinti.  Tinti was a highly respected Italian actor with an international career.  Tinti and Gemser met on the set of the first Black Emanuelle film and married soon after.  Tinti often took roles in exploitation films far beneath his cinematic calibre in order to be by his wife’s side. 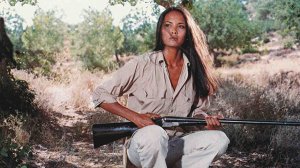 As the 1970s graduated to the 1980s, Gemser grew weary of undraping every time the camera motor began to run.  She actively sought out other types of roles that would afford her new experiences, but shaking her sexpot image would be no easy feat.  While many of her films contained unsimulated sex scenes, Gemser never participated in the hardcore fumblings.  Joe D’Amato opined that was because Gemser was “too smart” to agree to such things.  Either way, some more “enterprising” directors inserted hardcore shots featuring body doubles without her permission and to her considerable chagrin.  Nevertheless, Gemser soldiered on.

A step towards a more mainstream career came when she took a role in the American telefilm LOVE IS FOREVER (1983).  The film tells the true story of Australian journalist John Everingham (Michael Landon) who smuggles his Laotian wife Keo (Gemser) out of Laos by taking her underneath the Mekong River.  Despite being well-received, filming was not a pleasant experience for its female lead.  When director Hall Bartlett discovered Gemser’s notoriety in sex films he forbade anyone on set from referring to her by her real name.  He also, against her will, re-named her Moira Chen in the film’s credits.  The telefilm was an international hit, but Gemser and Tinti were soon back in Italian bump-n-grinders.

The same year LOVE IS FOREVER wrapped she made her final Black Emanuelle film WOMEN’S PRISON MASSACRE (1983).  While technically the lead, the Emanuelle character takes a backseat to the film’s over-the-top violence and gore.  Gemser doesn’t have a single nude scene in the entire film, that task is taken up by the rest of the female cast.  The curtain fell on Black Emanuelle and Gemser spent the remainder of the decade in small parts, usually for D’Amato.  By this time she had seen the world and didn’t seem to feel much motivation to stop the slowdown of her film career.

In 1991, after 15 years of marriage, Gemser’s world was shattered when husband Gabriele Tinti succumbed to a brain tumor at the age of 59.  Any desire to continue in films passed with her husband.  Gemser resurrected her interest in design by becoming Joe D’Amato’s wardrobe woman for a couple of years before retiring from public life for good.  It would seem as if the world would never see her again.  With very few exceptions, Gemser granted no interviews and those she did were off-camera.

At the cusp of a new millennium, the UK’s Channel 4 premiered a documentary by Alex Cox, EMMANUELLE: A HARD LOOK (2000).  In it we meet the folks behind the original Emmanuelle series and how it changed the face of sex cinema.  Interesting if unremarkable.  What a delightful surprise, then, when the elusive Laura Gemser appeared in the program to discuss her adventures as Black Emanuelle!  She was relaxed, smiling and generous with her memories of the series.  There were no flashes of regret, no wishing it had gone on longer.  Gemser comes across as someone who enjoyed her past but has no desire to go backwards.  These days she’s happy and at peace, living in quiet retirement with her parrots in Rome.

She was coaxed out of retirement once more in 2016, interviewed in a documentary about her late husband.  At 67-years-old, the bright smile and infinite charm are still very much present.

With so many of her films appearing on DVD it’s a good time to consider just what made Laura Gemser such an icon of sex cinema.  Her appeal went far beyond her stunning looks and willingness to bare it all for the cameras.  The history of exploitation has no shortage of such performers.  Laura Gemser has that indefinable star quality that defies categorization.  She was more a presence than a performer.

Even when surrounded by naked bodies copulating, Roman nobility vomiting, cannibals gut-munching, zombies throat-biting and nuns foxy-boxing, Laura Gemser always seemed apart from it all.  In every role she played she kept her tongue in cheek and a twinkle in her eye.  She knew she was making trash, but she didn’t mind.  She wasn’t out to impress anyone.  She was just having fun.  Perhaps that is why she is so much fun to watch?

Several years back we celebrated Ms. Gemser by creating this tribute, we hope you enjoy it!

Sleaze for the true cinephile.