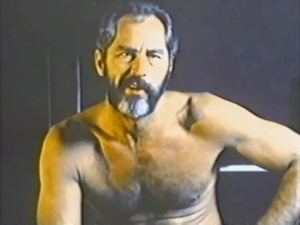 On a ranch in rural Montana, Rory and his fellow ranch hands are constantly bullied and humiliated by their cruel foreman, Shep. After a night on the town opens Rory’s eyes to both the agony and ecstasy of mansex, he hatches a plan to turn the tables on Shep and gain the upper hand.

HEATSTROKE hit adult cinemas with the tagline “Male Bonding…With a Vengeance” which pretty much sums up Gage’s entire canon. In the films of Joe Gage, unlike so many of his contemporaries, sex was about bonding, camaraderie and power. There were no hints of romance, no one pining for something more. Sex was merely a form of communication. He drove this point home in several of his films by including heterosexual sex scenes that nearly always brought up conflict, confusion and complication in the lives of the male participants. The man on man sex scenes were always much more straightforward…and oddly refreshing in a way. The films of Joe Gage do have an air of freedom to them. It’s a bit like watching TV when you know you should be doing something more constructive – but all you want to do is unwind and be aroused.

HEATSTROKE is a lesser-known entry into the Gage filmography, overlooked in the shadow of his legendary “Working Man” trilogy of films. This is a shame, as the film is excellent. The simple story of getting one’s own back against a cruel boss, by turning the tables of sexual humiliation on him, could well resonate with anyone who has ever felt under the thumb of a superior and wiled away the hours plotting their downfall.

The sex scenes in the film are numerous but they seem to be there to not just titillate, but to drive home Gage’s philosophy of sex being about communicating roles and deciding dominance among the cast of characters. This point is driven home by the sexual changes in our protagonist, Rory. Early in the film he visits a peep show, engaging

Gage also manages to weave in a thread of male sexual politics into the film. One character is turned away from a sex club for not being a hard-bodied stud. Of course, gay male body obsession is still alive and well. This viewer, being of a later generation, was surprised to see this in the supposedly “anything goes” gay sex culture of 1982 when this film was shot.

While every print of this film I’ve come across has been battered and faded, there are still traces of Gage’s inventive eye and interesting use of cross-cutting. There are lingering glimpses of Russell Ballard’s competent camera work even the most worn print floating on the afficianado market.

An interesting film, and sometimes uncomfortable and confronting viewing…but I think that was the point. In Gage’s films, gay sex is about bonding in the same way sport is to straight men. It’s about roles, the winner and the loser, the pecking order. Not much has changed, really. The “anything goes” sex culture may have fallen away somewhat, but the “body” politic is still alive and well.

If you would like to reproduce any editorial material appearing on this site, or would like me to contribute material to your publication, please contactJohnny Stanwyck.

This site presents material for critical and informational purposes. All text, unless otherwise noted, is original to this site. Any visual material (images and/or video) not created solely for this site are presented in strict adherence to the Fair Use provisions of U.S. Copyright law.