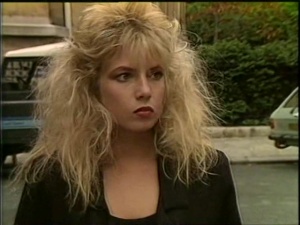 It’s very difficult to explain to anyone under the age of 35 what a huge star Traci Lords was in the early-to-mid 1980’s. I was only about 8 years old and rather sheltered during her heyday, and even I was aware of her notorious nubility. Friends’ fathers worshiped her, school kids whispered her name, and every time I got up the courage to peer through the curtains of the “forbidden zone” of our local Ma and Pa video store, Miss Lords’ pouty face looked back from the covers of countless video boxes. Lords was, without exaggeration, the only porn star since Linda Lovelace to become a household name. The few who hadn’t heard of her soon would as 1986 came to a close. You see, it turned out that the world’s biggest sex star was actually an underage strumpet for the bulk of her very prolific hardcore career.

Lords made only one adult film after turning 18 – and it became the Holy Grail. That film was TRACI, I LOVE YOU.

A big-haired blonde bimb…erm…bombshell travels to Paris to take her career to the next level. Bangin’ the boss only brings in dancing gigs, until she finds herself in the clutches of an obsessed photographer who lures her in to his den of sin and shame…or something like that.

Whatever it was that made Lords a superstar is all but absent from this interminable exercise. The buoyant personality and sexy-woman-in-the-typing-pool looks are replaced by a cold, big-haired 80’s worldliness. The European location of this film, which was certainly intended to display “class,” just looks gauche and gaudy in its shot-on-video countenance.

In the film’s first sex scene, Traci and her agent (played with absolute disinterest by Monaco-born porn legend Alban Ceray) discuss the starlet’s terms. The dialogue is so awkwardly written and painfully delivered, one wonders if Ceray had simply learned it phonetically, and Lords seems to be making it up as she goes along. When they finally decide to bump uglies (standing up, with Traci bent double in spiked heels – and all the discomfort that implies) the chemistry is non-existent. Lords spends the entire scene trying not to fall off her shoes and topple Earthward, while Ceray pumps away absently. He often looks off set, no doubt in search of a fluffer. And folks, it’s all downhill from here…

Of course, this bit of the film gives us a classic piece of dialogue, courtesy of one of Traci’s lackluster suitors (complete with the smarmiest of accents.)

“My cock had found its dream home…it was warm and moist. I never wanted to leave!”

Charlotte Brontë, eat your heart out. 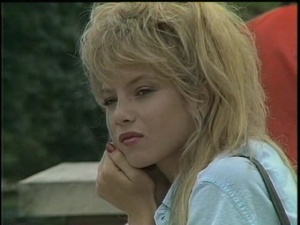 Then…the credits roll. Does Traci ever escape from her tormentors? I don’t remember. Does anyone still care?

By all accounts, TRACI, I LOVE YOU doesn’t hold a candle to Lords’ pre-legal films – and we younguns will never know. Never was an adult film a less essential span of videotape. Those who loved Lords in her glory days will no doubt be disappointed. And those like myself, too young to remember, will be no closer to unraveling the mystery of her enduring popularity.

TRACI, I LOVE YOU is a moldy slice of fromage that need not stink up your adult film collection.